usually a post on a holiday in goa would begin with the sea, and end with the sea and there would be many mentions of the sea in between all of that too… words about the lovely beaches, the lovely sand, the private beach which you couldn’t reach, the lounging, the shacks, ‘susegad’, the packed shacks, martin’s corner, sunset at betalbatim, interspersed with vegetarians cribbing about the lack of options and the meat eater canoodling with ‘children of sea’, but it always comes back to the sea and the beaches… the white… the blue… the foam… the froth… gentle waves… silent… peaceful… calm… this year, we muddled up the mix. we went to goa in the monsoons… so whats the big deal?

this picture says it all… and we encountered it everywhere… so the one main reason to goa was wiped out, but we wanted to see what else we could do. we wanted to discover the other side of goa, would it be the jekyll or the hyde? the beaches are almost a crutch, once there you just do not want to go anywhere else as you are already in the midst of beauty. wouldn’t you agree? 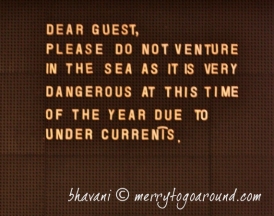 after a short and quick flight, we arrived to a rain drenched and fresh goa and made our way to the hotel. the hotel was by the beach and through the day and night i could hear the waves’ menacing dance, it was a loud announcement of the arrival of the monsoons. and rightly so the seas were banned!

so we bundled ourselves into our moist rooms and watched the sea from the balcony of our 4th floor room. it was a gorgeous view of angry waves beating up the shores.

goa is a green state through the year and that green just doubles in the monsoon. the green is greener, so much so that even the brown earth starts to look green. there are creepers everywhere, grass growing wild, weeds starting to become largish shrubs.  the roads are black juxtaposed by the green. you have to almost shield your eyes. so what did we do apart from marvel at black roads and green grass?

we visited a far-flung pond beyond quepem that even the locals haven’t heard about. marveled at a basalt rock temple just before the karnataka border… had coffee, hummus and soup in a cute & quaint cafe at an art centre in panjim… spent a night in a huge log cabin / cottage by the mandovi river. explored the monuments and churches in velha goa… drove down to ribandar, took a ferry across to a small, isolated island with beautiful bungalows in various stages of their life-cycle. then watched a bunch of kids play football in the rains with their ‘messi’ t-shirts, and got stared at… gorged on an elegant and delicious meal at a homestay in south goa, with two beagles sitting at our feet and begging for food. went to a pub that had a beer tap at every table and had a husband who went ‘oh wow’ quite continuously… searched for a baskin robbins post 12 midnight to celebrate a birthday, didn’t find it and other ice-creams shops weren’t open. partied with a bunch of local friends who played a card game that even i could understand… and then they fished post midnight! (yes, what’s with that, i didn’t understand either!)

so on this trip to one of my favourite places in india, i didn’t set a foot on any beach, i didn’t squeeze the sand between my toes and i didn’t take photos of sunset. and marvelously so, i didn’t have any sand in the corner of my bathroom that drove me mad… this trip was all about the non-beach goa and we were pleasantly surprised, there was lots to see and do, and still is. but thats for another trip in another monsoon!

26 thoughts on “goa without the beaches” 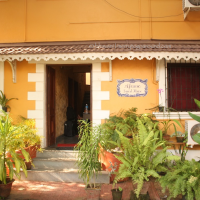