I first chanced upon the idea of this book called Mr. Bliss at Brainpickings.org. Honestly, till then, I thought that Tolkien had only writtenLOTR, which I read as a college kid years ago and that his name had only one R. (His full name John Ronald Reuel Tolkien.) The pictures of the book looked really interesting, and I was curious to read it. How would a man, who had created such complex stories set in fictional, fantastical worlds such as LOTR, write a simple story for his children? In attempting to simplify, would he lose the essence of his writing? I looked around for the book (online of course) but it was very expensive. I forgot about it till a few days ago when I chanced upon it in the local library. I never thought a library in India would actually keep that book, but loved the surprise! Promptly issued it. And there I was late Tuesday evening, having finished Book 2 of the Nicholas Flamel series, itching to begin reading Mr. Bliss. 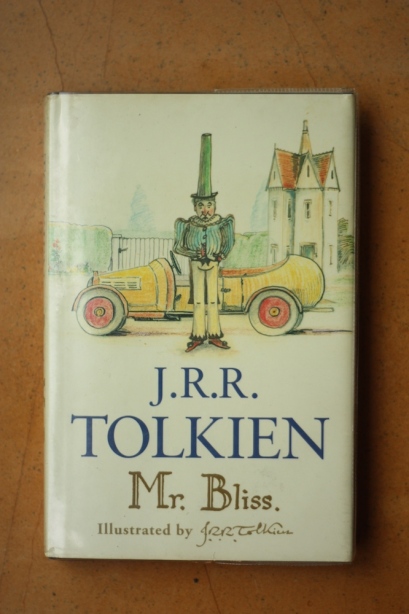 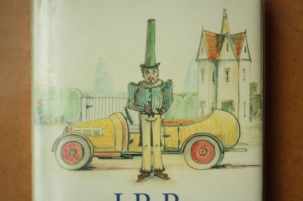 The cover of Mr. Bliss pretty much summarises the story, in a way. What happens when this man buys a motorcar. I love that Tolkien’s name in print is on top, and then below, its his handwritten name (or signature) that states it was also illustrated by him. The first page of the story is a dull grey coloured page with Mr. Bliss hand-written. I suspect there was a signature towards the bottom corner, but it was rather washed out. I turned over to a simple, but well-done illustration of a man with a long hat that extended high above his head. He stood there, slouching, looking towards the ground with what I thought was a sorrowful expression. It was a really simple way to begin a book, but somehow I was drawn in. I wanted to know who he was. The story began and I was let thinking, WOW Tolkien can even draw? I must tell you at this point that this edition by Harper Collins is totally brilliant, the first half is the story in print and the illustrations, in the second part you can actually read Tolkien’s handwritten text with the pictures laid out the way he originally had it. Most of the pictures you will see are from that part of the reproduction, since I absolutely loved it. Let’s get on with the story!

A few pages down I met Girabbit; this wonderful creature, as you guessed, is a half-giraffe and half-rabbit. Nowhere does Tolkien explain that, he chugs along slowly and after a puzzled look, a few seconds later, I caught on. He doesn’t spoon-feed and I liked that. The book is filled with small little nuances like the cycle that doesn’t have pedals, so it could only go down hill. And the motorcar that doesn’t have lamps, you needed to ask for them… is that true of those times? Or was it just a fun twist?  The illustrations are integrated with the story, meaning the story is taken forward through them. At times they show the action, which is not really explained in that much detail on the page, or they add a layer to the story… one more facet… one more event that took place… and one more laugh that’s offered to the reader. That meant I always looked out for the pictures and the small print that was next to it. Unlike other books where I know I look at the illustrations, but not this carefully. Check out the examples below.

The beautiful car, but where are the headlamps, and the cycle with no pedals.
Check out the the girabbit sticking it’s head through the multiple levels of the house and out of the chimney!
Mr. Bliss says he didn’t not know that it’s neck was quite for telescopic.

Photographs of his little notes to one side, they might be blurry but do read!

The story is sweet, though not as whacked as Alice in Wonderland, I guess Tolkien wasn’t stoned when he wrote this. I read in the book jacket, that “In 1936 he submitted it (this book) to his publishers as a possible successor to The Hobbit, but they could not afford to print the illustrations, so the book remained undiscovered until long after Tolkien’s death in 1973.

I began the book to know how Tolkien’s imagination and powers of creation would play out in a children’s book… would it be simple enough, or too whacked? I ended thinking that he had managed to keep the world of Mr. Bliss colourful and charming, it was not too complicated for a child to feel lost, and at the same time, despite the few words and simple descriptions, I feel like I know those characters and people. I know Mr. Bliss for sure 🙂 I do wonder if I am partial because I know this was written by Tolkien, but that is something I cannot negate from the picture… and yes, if I am influenced by LOTR’s supreme creativity, then so be it. 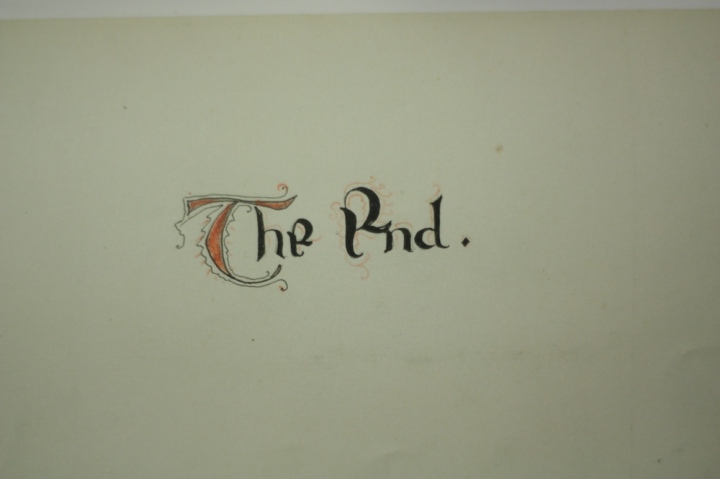 4 thoughts on “mr. bliss, tolkien and some thoughts”